The Differences between Medicare and Medicaid - ABC Medicare Help 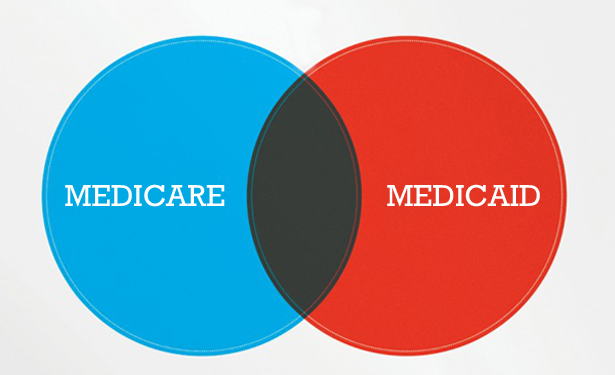 Medicare vs. Medicaid
Medicare is generally for people who are older or disabled, whereas Medicaid is a state-administered program for low-income and disabled U.S. citizens and legal aliens. Although many of the coverage details are determined by individual states, each state must provide certain services, such as specific hospital and doctor services.

It's possible to be eligible for both Medicare and Medicaid. If you think you might qualify, you need to fill out a Medicaid application. If you do qualify, Medicaid can help pay for your Medicare premiums, deductibles, and/or coinsurance.

Medicare basics
Medicare is a federally funded program available to most U.S. citizens and permanent legal residents who have lived continuously in the country for five years or more and are age 65 or older.

People younger than 65 may also be eligible for Medicare if they:

To qualify for premium-free Medicare Part A, you or your spouse need to have worked at least 10 years and paid Medicare payroll taxes while working. Medicare Part B has a premium that most people pay. To cover additional costs or provide more health-care services, you may enroll in a Medicare Prescription Drug Plan (Part D) or a Medicare Advantage plan (Part C). Medicare Advantage plans and Medicare Prescription Drug Plans are offered by private Medicare-approved insurance companies, and costs, coverage details, and availability may vary among plans.

Medicaid basics
Medicaid is jointly funded at the state and federal levels. Medicaid supports low-income individuals and families by covering costs associated with both medical and long-term custodial care for those who qualify. Some of the benefits covered under Medicaid overlap with Medicare, such as inpatient and outpatient hospital care and doctor services. However, depending on the state, Medicaid may also offer coverage that is not included under Original Medicare, such as personal care, optometry services, and dental services. Also, the service providers (such as hospitals and doctors) available to people using Medicaid are often different than those available to people using Medicare.

Eligibility for Medicaid is means-based, and the program has strict income eligibility requirements that vary from state to state. The Affordable Care Act expanded Medicaid eligibility levels in some states beginning on January 1, 2014. For more information on current qualification requirements, individuals should call their State Medical Assistance (Medicaid) office or visit Medicaid.gov.

Outlined below are further differences between Medicaid and Medicare.